bienalcostarica.com
ALFAMA 2.0 // RE-Habilitation / RE-vitalization / RE-structuration
COSTA RICA
Arq. Maria Gonzalez Aranguren
Alfama 2.0 /// RE-habilitation // RE-vitalization // RE-structuration ///
Sometimes when we think in S.XXI city we think in modern, new and high tech buildings, but we forget the historical centers of the cities, full of history and tradition but in very poor condition and occasionally abandoned. Therefore, this project aims to address this problem through the rehabilitation and reactivation of the oldest district of Lisbon:
ALFAMA.
It is about rethinking how to improve or adapt these buildings and the neighborhood for people to use it and to make it productive. This doesn´t mean that we cannot innovate and propose new productive and energy-efficient solutions, as perhaps the most important solution for the cities to become cero carbon polluted, is transforming these old buildings, that are polluting more energy because of their old architectural solutions.
In this neighborhood are clear problems like: substandard housing, insalubrity, insufficient light in homes, streets full of steep stairs, lack of young people, closure of shops due to inactivity, elderly population...
On the other hand, it is a historic district full of smells and feelings, and birthplace of the melancholic “fado” music; and with a unique and very distinctive beauty that gives personality to Lisbon: its colorful tiles facades.
Because of their importance, is decided to intervene in the neighborhood by emptying interior of the buildings in poor condition, keeping and restoring these traditional facades.
The project intends to study the rehabilitation of a number of properties and for this, it does not study the houses independently, it understands rehabilitation as a group, with the intention of making the slightest distinction between public and private, creating a semi-public spaces integrated in the buildings.
The idea is to keep the spirit of the neighborhood. This prevents make buildings closed and hermetic. These are buildings in relation to the streets and permeable to them, that is, the building becomes part of the neighborhood and can be entered through the ground floor of public facilities such as restaurants and shops, connected with public
galleries and green courtyards. These public facilities are scattered also on different floors with the intention of creating dynamism, life, space complexity and mix of uses; and are connected through bridges or walkways at different heights (saving a different height of 80 m from the port to the castle) to facilitate the transit for the elderly population that
mostly live there.
It can be considered as rehabilitation also from the urban point of view, that respect and maintain the external appearance of the streets, with the idea of “Rehabilitating the city.” With this urban strategy is preserved a fundamental area for the city, making it accessible for older people who mostly live there.
Haz clic para configurar HTML personalizado 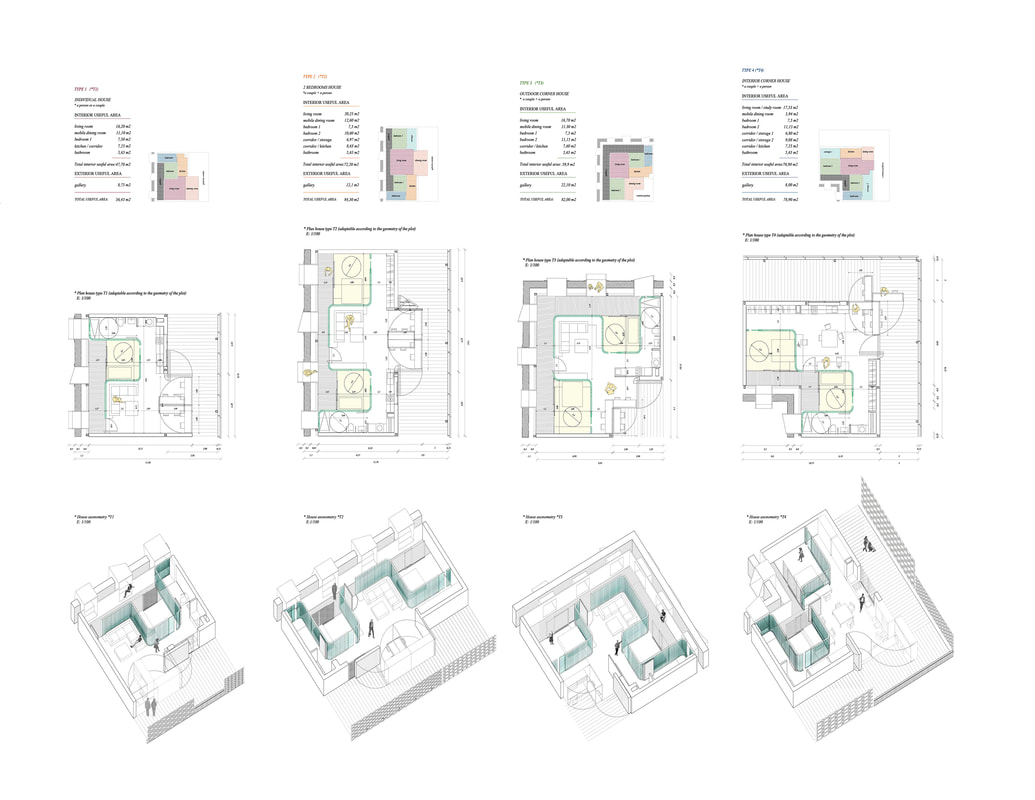